This next case ramps up the technical difficulty a bit. It was one of my first TEEs of my fellowship, but it shows one of those classic findings we get excited for when we see it and I couldn’t resist sharing it. For those less familiar with TEE I’ve labelled each view.

This is 54 yo M who presented for an elective surgery.  On POD # 0 he became tachycardic with subjective dyspnea and hypotension progressing into a PEA arrest.  ROSC was quickly obtained with typical ACLS and he was placed on life support and transferred to the ICU for further management. A CTPA was negative, and his EKG was unremarkable with no evidence of coronary ischemia.  On POD # 1 he remained hemodynamically unstable, and given very poor transthoracic windows, the decision was made to perform a TEE.  Have a look at the images and Doppler information below. Is there a finding that may explain the etiology of his arrest? What would your recommendation be to the treating team? 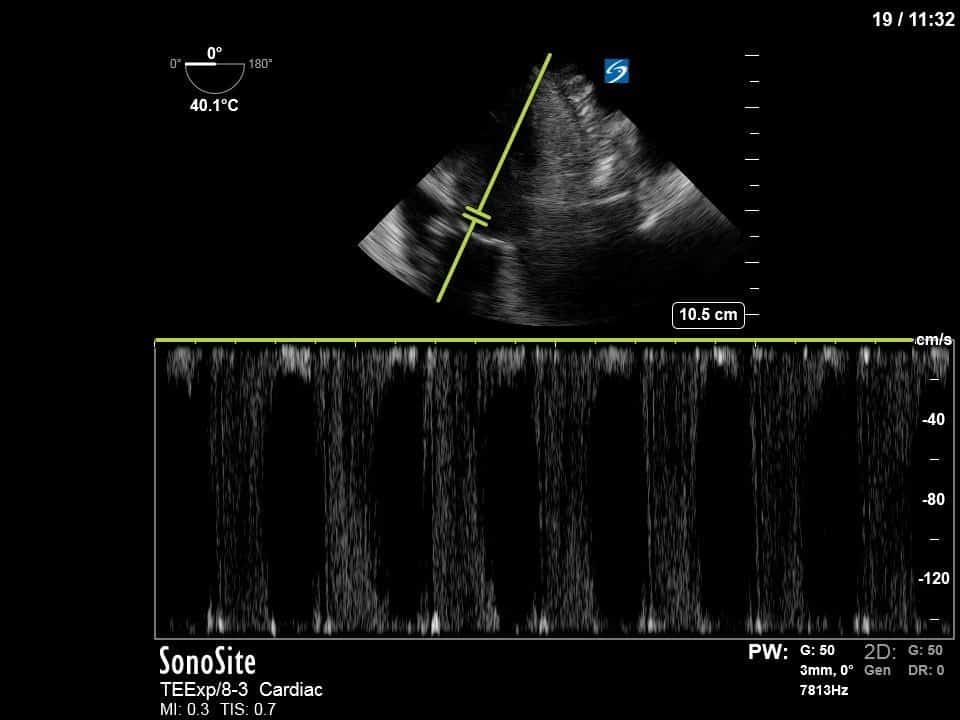 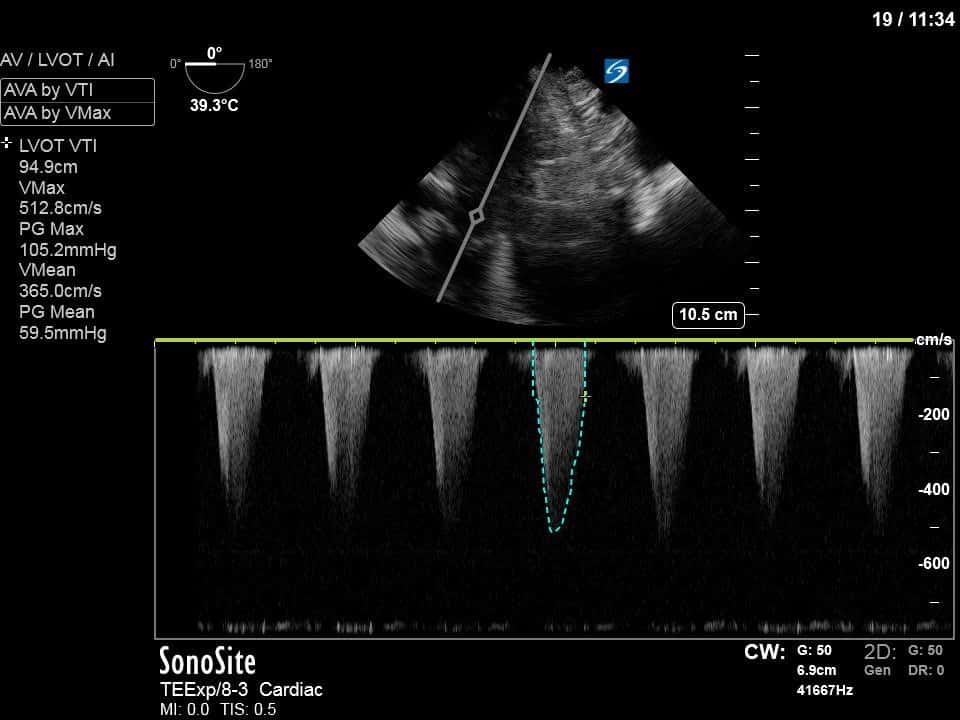 This is a case of systolic anterior motion of the mitral valve (SAM) with dynamic LVOT obstruction! Look closely at the mitral valve in the different views. You can see that during systole there is movement of the mitral valve anteriorly towards the LVOT. Below are 2 still images of the ME LA view and Deep TG view showing the “crowding” of the LVOT from SAM. 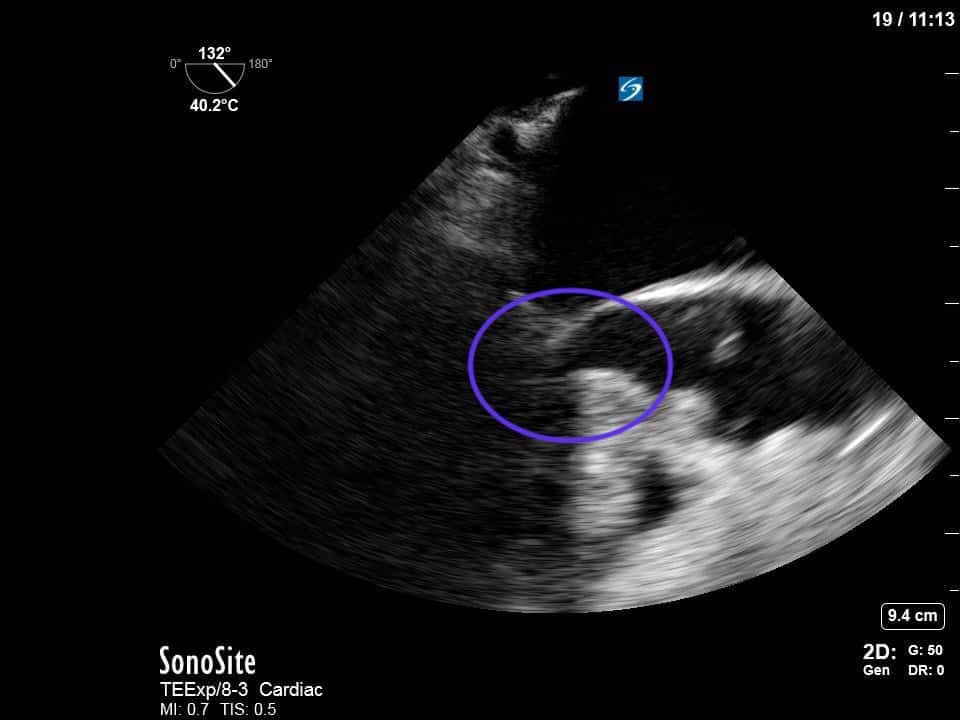 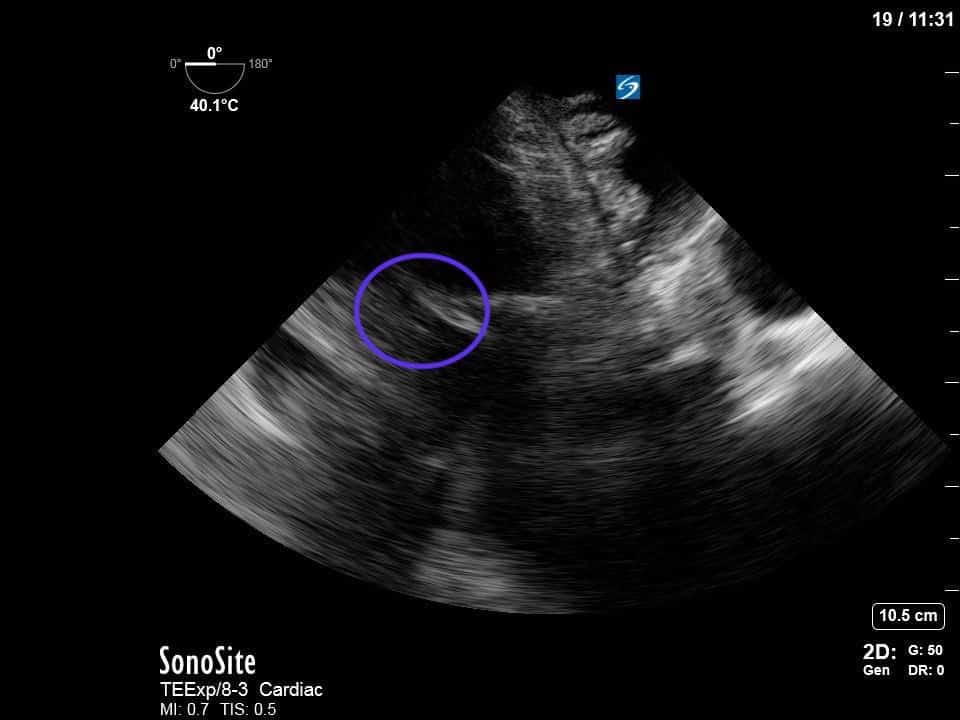 Although typically SAM has been described in the context of hypertrophic cardiomyopathy, it is increasingly appreciated that it can occur in other settings as well and should be included in the differential of refractory shock. In this case the patient had a sigmoid septum with increased wall thickness of the basal septum.  This creates the substrate for increased flow velocity through the LVOT.  This increased velocity is evident in the aliasing of the colour Doppler through the LVOT in the ME LA view. The Venturi effect describes the pressure decrease as a result of this increased velocity of flow.  The pressure decrease acts to “pull” the mitral valve towards the LVOT creating SAM.  This worsens the dynamic LVOT obstruction and ultimately creates an even higher pressure gradient. SAM also can result in abnormal coaptation of the mitral valve which can create MR (appreciated best in the ME 2C view above).

In this case, we also ended up calculating the LVOT pressure gradient as a result of the SAM.  Notice that the attempt to place PWD in the LVOT resulted in aliasing of the spectral doppler signal (an expected finding given the aliased colour doppler flow).  Switching to CWD gave a relatively pointed doppler signal (morphology consistent with LVOT obstruction), with a peak velocity giving an estimated pressure gradient of ~ 105mmHg! A significant LVOT gradient has been described as anything greater than 30mmHg, thus this represents a very hemodynamically significant gradient.

If all this discussion of the Venturi effect, Doppler, aliasing and pressure gradients is overwhelming, stay tuned for future weeks when I’ll flesh out the principles behind these concepts a lot more! For now, see the attached articles which give some more explanations on SAM, its pathophysiology and its management.

Thus, this TEE showed SAM with dynamic LVOT obstruction and presents a plausible etiology of his arrest.  The theory is that in his post-operative state, he became dehydrated, and subsequently developed tachycardia and a hyperdynamic LV — two features that could have precipitated SAM and severe dynamic LVOT ultimately leading to his PEA arrest. The recommendation in this case was to avoid further inotropes, give a little more volume, and if needed, use more pure vasopressors such as phenylephrine.

I talked about a simple approach to understanding vents and discussed the modes that you probably work with on a daily basis.

Addressing the challenges of the 4 components of transition to eFONA: Prevention, Primimg, Permission & Performance.

Yale’s most popular course ever teaches the science of being happy. Now you can take it for free online https://www.fastcompany.com/90482926/yales-most-popular-course-ever-teaches-the-science-of-being-happy-now-you-can-take-it-for-free-online

Hmmm: Can Jot’s coffee concentrate make you forget about that $5 latte? Here’s what our editors say https://www.fastcompany.com/90510481/can-jots-coffee-concentrate-make-you-forget-about-that-5-latte-heres-what-our-editors-say