This week’s case is a 67-year old woman who presented for an outpatient EGD. Post-procedurally she became hypoxic, so was brought to the ICU for monitoring and NIPPV. She was initially hemodynamically stable; however, over the next 6 hours she became profoundly hypotensive requiring very high doses of multiple vasoactive agents. She had a PMHx significant for severe COPD and HFpEF, with an Echo from earlier this year showing an EF of 50%.

Below are her the clips taken upon arrival of the POCUS team the next morning. What do you think is causing her shock based on these images? You might want to make yourself comfortable, cause this week’s case is a doozy and has a lot to unpack.

*Note: given her marked hyperinflation she had no obtainable traditional parasternal or apical windows, so all views were obtained from a modified subxiphoid position (hence the unconventional axis).  These scans are a good lesson, however, that you can still get lots of important information even when your views aren’t perfect! 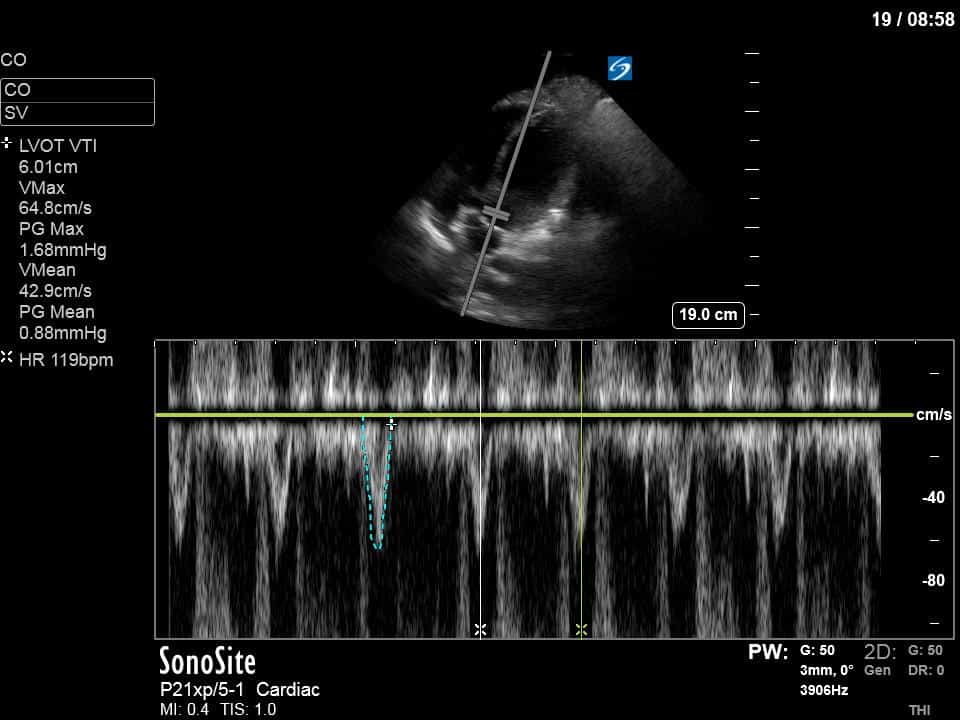 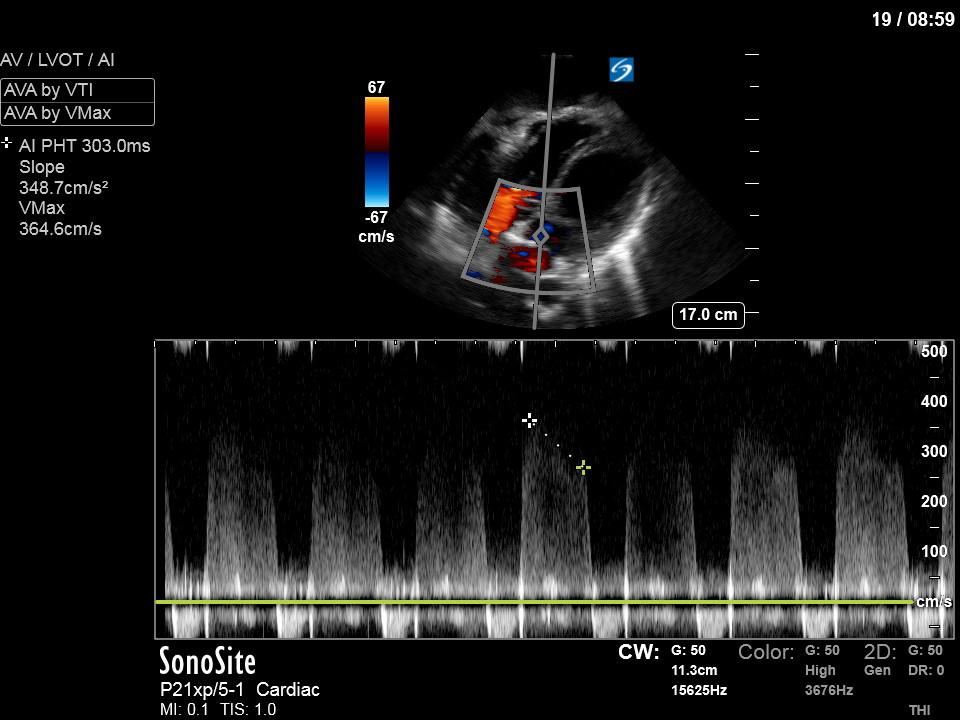 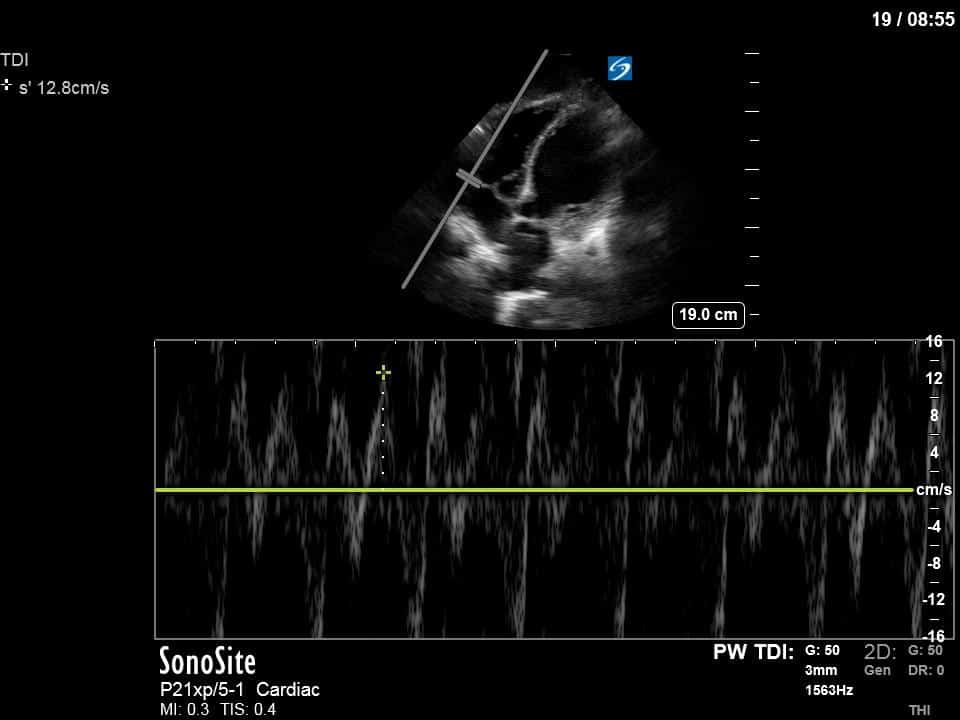 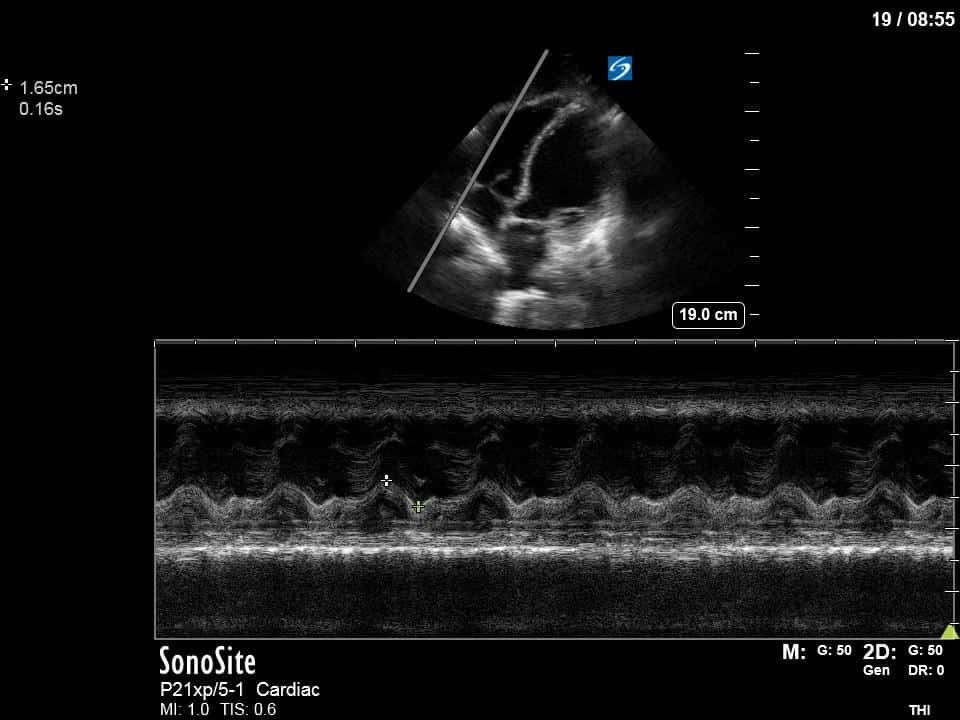 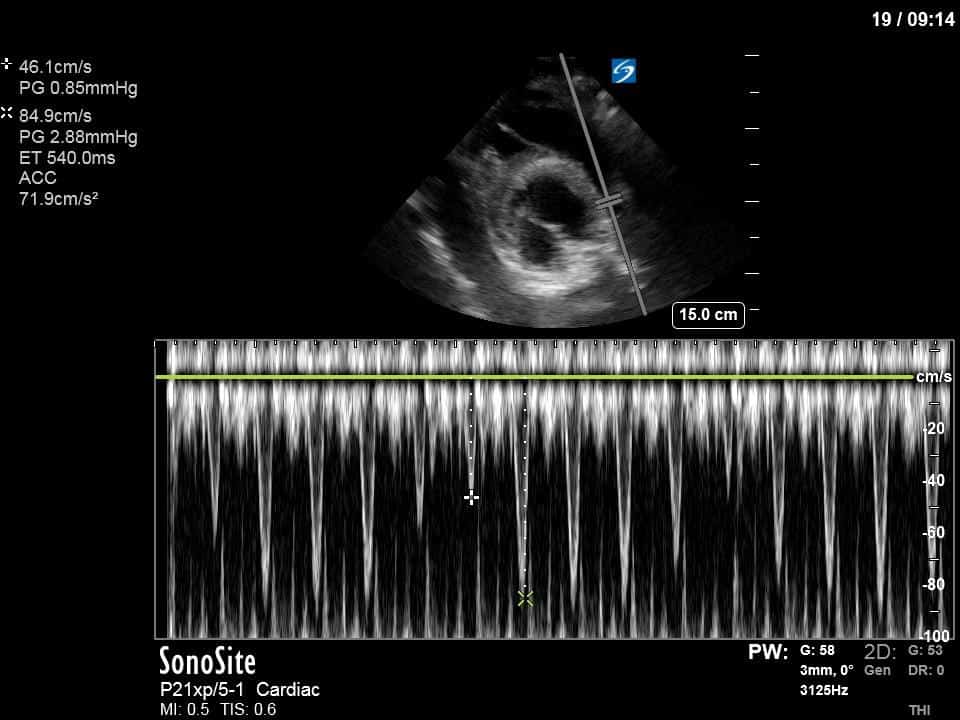 Ok – there’s a lot going on in this study.  The most shocking and obvious finding is the severely depressed LV function. From a POCUS perspective we often think about classifying LVEF into 4 categories: hyperdynamic (EF > 70%), normal (EF 50-70%), moderately depressed (EF 30-50%), and severely depressed (EF < 30%). This heart certainly falls into that last category, as we see in several views that the LV walls are hardly contracting. There is some regionality here, with the basal segments contracting slightly more than the apex, which appears almost completely akinetic. As a testament to this, we actually see spontaneous echo contrast in the LV apex (visible both in the PSAX and the modified A4C views), which is evidence of very low velocity blood flow and is a nidus for LV thrombus formation. Our LVOT VTI of 6 (recall that normal is 18-22) confirms that this is primary cardiogenic shock with an alarmingly low cardiac output.

To make matters even worse – not all of that cardiac output is going forward! In an apical 5-chamber with colour Doppler, we note a red jet during diastole that represents aortic regurgitation. Spectral Doppler is then used to generate a pressure half-time, which is a semi-quantitative measure of severity. In severe aortic regurgitation, the pressures between the aorta and the LV equalize very quickly (due to a high volume of flow through an incompetent valve), resulting in a fast PHT. In this case, the PHT falls into the moderate category (200ms-500ms) – not life-threatening, but certainly not helping her already paltry cardiac output.

There are a few other findings that the astute among you will have picked up. The right ventricle appears to have mildly reduced function with a borderline TAPSE, although S’ is normal. There is severe TR, and there appears to be a hyperechoic density on the ventricular side of the tricuspid valve. This was hypothesized to represent a ruptured chordae or pap muscle rather than a vegetation, due to the lack of independent movement and its location on the ventricular (high-pressure) side of the valve.

Finally, a pulse-wave Doppler interrogation of the RV outflow tract reveals marked respiratory variation. This is a marker of adverse heart-lung interactions and is most typically associated with one of three things: significant RV dysfunction, high pulmonary afterload (often due to ventilator settings in the ICU), or hypovolemia.  Given that this patient had only mildly impaired RV function and was on minimal ventilator settings, we hypothesized that she actually may be slightly hypovolemic (which is very counterintuitive given her profound LV failure). This is supported by her diminutive IVC (which was measured at 1.4cm).

Overall, this represents a severely depressed LV (EF estimated 10-20%) with very low cardiac output, consistent with cardiogenic shock. The working clinical diagnosis is an acute-on-chronic picture: the thinning of the LV myocardium and LV dilation suggest chronicity (perhaps due to CAD), with a likely superimposed septic cardiomyopathy, as she’s now had positive cultures (and on further history was unwell at home for some time prior to her presentation).

Based on the initial POCUS findings, inotropy was uptitrated significantly, vasopressin was discontinued (pure peripheral vasoconstriction will worsen AR), and the patient received very (very!) judicious fluids. The following clips were taken the next day as a focused reassessment: 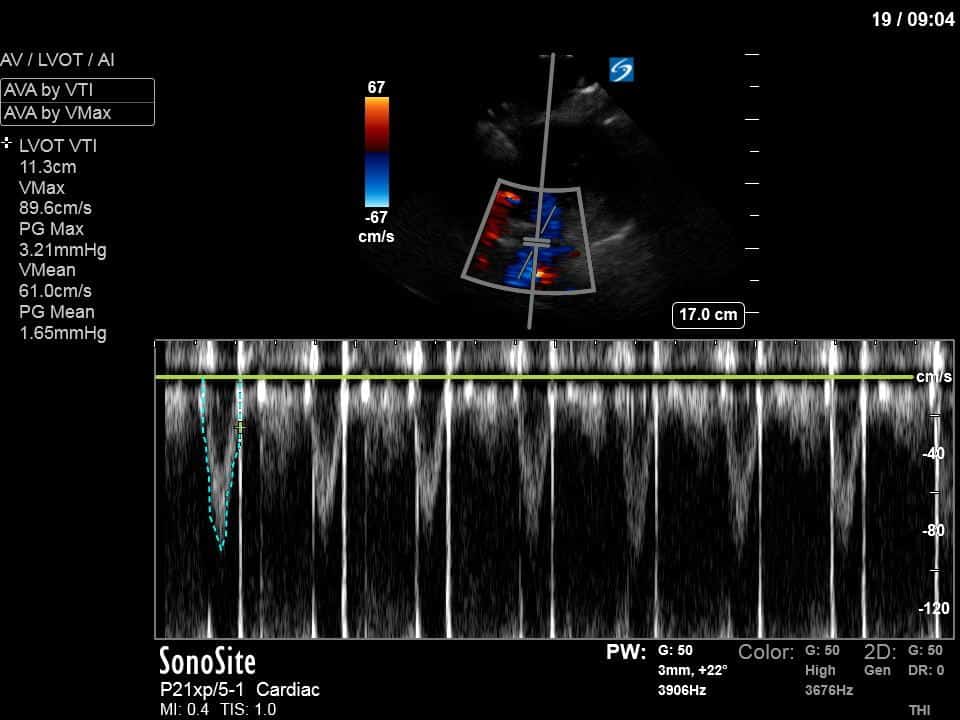 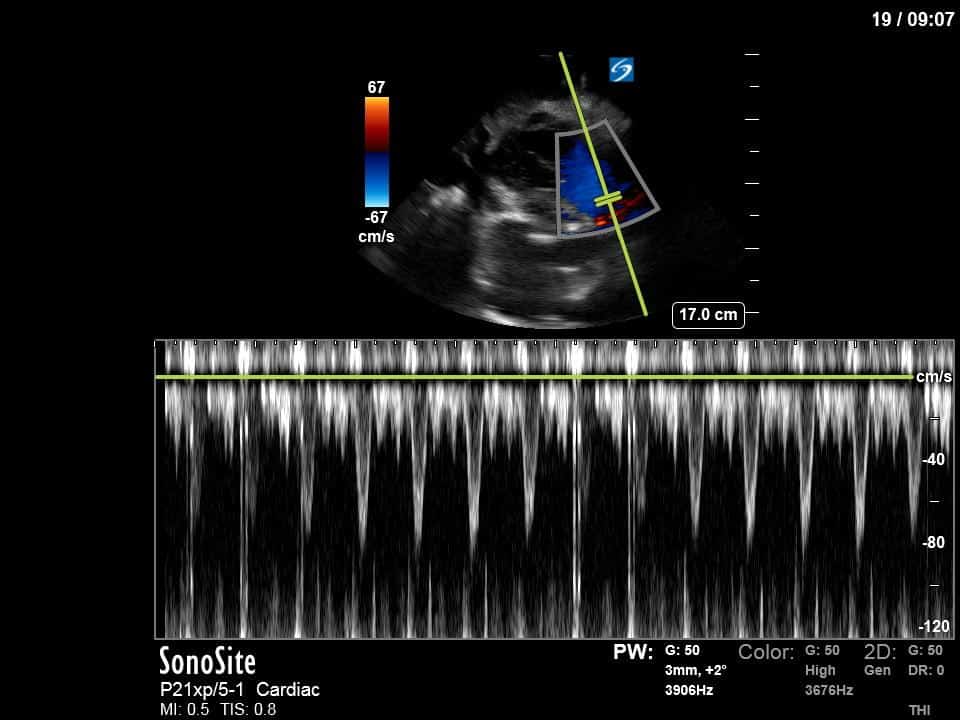 As you can see, LV function still looks severely impaired; however, with the addition of inotropy and a small increase in preload, VTI has doubled. We also no longer see signs of hypovolemia with a loss of RVOT VTI variation and a plethoric IVC (now 2.7cm). At this point, we cautioned against any further fluids and suggested continuation of inotropic support.

This case covered a lot of complex hemodynamic principles, so if you want to explore some of these topics in more depth, head on over to the screencasts at WesternSono.com. Happy scanning!

I talked about a simple approach to understanding vents and discussed the modes that you probably work with on a daily basis.

Addressing the challenges of the 4 components of transition to eFONA: Prevention, Primimg, Permission & Performance.

Yale’s most popular course ever teaches the science of being happy. Now you can take it for free online https://www.fastcompany.com/90482926/yales-most-popular-course-ever-teaches-the-science-of-being-happy-now-you-can-take-it-for-free-online

Hmmm: Can Jot’s coffee concentrate make you forget about that $5 latte? Here’s what our editors say https://www.fastcompany.com/90510481/can-jots-coffee-concentrate-make-you-forget-about-that-5-latte-heres-what-our-editors-say