Given that the holidays are upon us, this week’s COTW and COTG will be short but sweet. We will follow up with the answers in 2019! Scroll to the bottom for answers from last week’s cases and take home points.

A 62 year-old female was admitted to the ICU after a presumed hypoxic cardiac arrest. She had a history of “heart failure” and renal failure on dialysis.

Below is some advanced POCUS applications in the same patient to supplement your above hypothesis.

What do these still images tell us about the patient's heart function and pressures?
Total Votes: 34
* - added by visitor
×
You or your IP had already vote.

To remind you briefly of last week’s case we had a male in his 20s with worsening septic shock post laparotomy for small bowel perforation. This is what his POCUS showed:

What did you think was going on here? What would be your management plan?

The subcostal 4-chamber and subcostal short-axis view both show severe global LV systolic dysfunction. This was unexpected in a young patient with no known cardiac disease. Based on this POCUS study the patient was started on inotropes with some improvement in the LV function (cardiac output actually doubled despite a decrease in HR from 160 to 140bpm).

But wait, there’s more… as an astute POCUSer you would have also noticed the anechoic space right on top of the RV…with the RV free wall apparently “flapping in the breeze” of that anechoic space! This is a pericardial effusion but it’s important to make sure it’s distinct from ascites which in this post-laparotomy patient would be more likely. The subcostal short-axis view however confirms that this is pericardial fluid. Importantly the collapsing IVC (this patient was triggering assist-control breaths) argues against tamponade physiology. Nearly all patients (>90%) with tamponade have a dilated or plethoric IVC so at this point the focus was on improving the cardiac output by augmenting LV function.

Two days later the effusion was increased as shown below, along with a plethoric IVC with no respiratory variation. Is the patient displaying tamponade physiology? Does he need a pericardiocentesis? 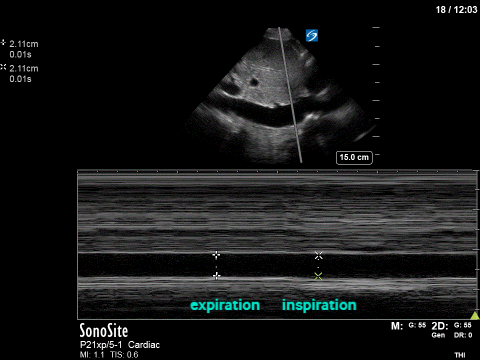 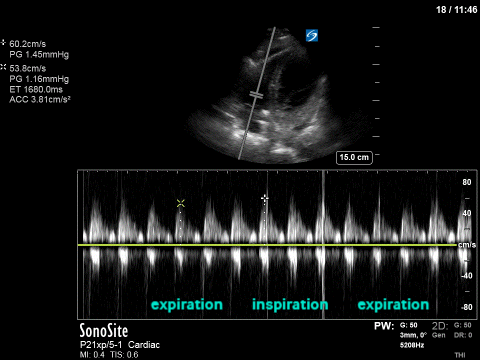 The short answer is no…at least not based on this doppler pattern. The longer answer needs some explaining. At first look, one might think, the now dilated IVC might suggest tamponade but this is a non-specific finding as numerous things can cause IVC dilation. The second image is more useful here. The PW Doppler was placed at the tricuspid valve inflow (i.e. where the TV leaflets open during diastole) to look at the effects of respiration on right heart filling (and therefore output). It’s basically the echo way of assessing pulsus paradoxus. If there is significant variation (>60%) this is suggestive of tamponade physiology. You can apply the same concept for MV inflow or LVOT VTI with opposite effects of the respiratory variation. Remember though, cardiac tamponade is always a CLINICAL DIAGNOSIS! (the internist in me won’t let me forget that!).

Smiling faces all around. Loved having an all WOC #medstudent Q&A. Sessions are 100% open to all but this was a special surprise! Discussed strategy 4 residency applications. #MedStudentTwitter I'll be holding these for as long as there is interest. DM if interested in joining. https://twitter.com/AdairaLandryMD/status/1282841503409242113

Learning from @alvarezzzy --I'm trying to practice more self-compassion and prioritize tasks that bring me joy. I love mentoring #medicalstudents. 8 students on yesterday! Remember it's not work if what you are doing brings you joy. #medstudenttwitter DM if you want to join https://twitter.com/AdairaLandryMD/status/1280947165221851142

Thanks to @roberson3james for organizing a mentoring session with his Meharry @MeharryMedical classmates! 10 amazing POC MS4s all coming from an HBCU! All this talent just waiting to shine! https://twitter.com/AdairaLandryMD/status/1287473392111751171

Smiling faces all around. Loved having an all WOC #medstudent Q&A. Sessions are 100% open to all but this was a special surprise! Discussed strategy 4 residency applications. #MedStudentTwitter I'll be holding these for as long as there is interest. DM if interested in joining. https://twitter.com/AdairaLandryMD/status/1282841503409242113

Calling all healthcare workers - life saving mail order medications are being held up by post office delays. Help our patients by calling Congress to save the post office. Details and script below.